Truth and Trauma in Gaza

“Due to simple racism and a jingoistic eagerness to get in line with U.S. military policy, Western commentators ignore the bombardment of Gazan neighborhoods which has caused thousands of casualties over just the past few years.”

Dr. T., a medical doctor, is a Palestinian living in Gaza City.  He is still reeling from days of aerial bombardment. When I asked about the children in his community he told me his church would soon be making Christmas preparations to lift the children’s spirits.  Looking at his kindly smile and ruddy cheeks, I couldn’t help wondering if he’d be asked to dress up as “Baba Noel,” as Santa Claus.  I didn’t dare ask this question aloud. 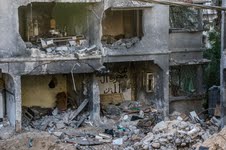 “The most recent war was more severe and vigorous than the Operation Cast Lead,” he said slowly, leaning back in his chair and looking into the distance.  “I was more affected this time. The weapons were very strong, destroying everything. One rocket could completely destroy a building.”

The 8-day Israeli offensive in November lasted for fewer days and brought fewer casualties, but it was nonstop and relentless, and everywhere.
“At 1:00 a.m. the bank was bombed, and everyone in the area was awakened from sleep.  Doors were broken and windows were shattered.  There was an agonizing sound, as if we were in a battlefield.”
“The bombing went on every day.  F16 U.S. jets were hitting hard.”
“This is more than anyone can tolerate.  We were unsafe at any place at any time.”
U.S. media and government statements are full of accounts about the scattershot Hamas rocket fire that had taken one Israeli life in the months before the Israeli bombing campaign.  The U.S. government demands that the Gazans disarm completely.  Due to simple racism and a jingoistic eagerness to get in line with U.S. military policy, Western commentators ignore the bombardment of Gazan neighborhoods which has caused thousands of casualties over just the past few years. They automatically frame Israel’s actions as self-defense and the only conceivable response to Palestinians who, under whatever provocations, dare to make themselves a threat.

“Any house can be destroyed.  The airplanes filled the skies,” Dr. T. continued. “They were hitting civilians like the one who was distributing water.”  ThePalestine Centre for Human Rights report confirms that Dr. T is discussing Suhail Hamada Mohman and his ten year old son, who were both killed instantly at 4:30 p.m. on Sunday, November 18, 2012 in Beit Lahiya while distributing water to their neighbors.
Dr. T. then mentioned the English teacher and his student killed nearby walking in the street.  The PCHR report notes that on November 16, at approximately 1:20 p.m., Marwan Abu al-Qumsan, 42, a teacher at an UNRWA school, was killed when Israeli Occupation Forces bombarded an open space area in the southeast section of Beit Lahia town.  He had been visiting the house of his brother, Radwan, 76, who was also seriously wounded.
And Dr. T. mentioned the Dalu family.  “They were destroyed for no reason. You can go visit there.”
The next day, I went to the building north of Gaza City where the Dalu family had lived. 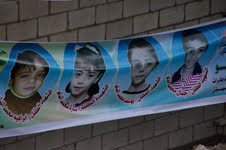 In the afternoon on Sunday, November 18, an Israeli F-16 fighter jet fired a missile at the 4-story house belonging to 52-year-old Jamal Mahmoud Yassin al-Dalu. The house was completely destroyed as were all inside.  Civil Defense crews removed from the debris the bodies of 8 members of the family, four women and four children aged one to seven.   Their names were:

Samah Abdul Hamid al-Dalu, 27;
Tahani Hassan al-Dalu, 52;
Suhaila Mahmoud al-Dalu, 73
Raneen Jamal al-Dalu, 22.
Jamal Mohammed Jamal al-Dalu, 6;
Yousef Mohammed Jamal al-Dalu, 4;
Sarah Mohammed Jamal al-Dalu, 7;
Ibrahim Mohammed Jamal al-Dalu, 1;
On November 23rd, two more bodies were found under the rubble, one of them a child.
The attack destroyed several nearby houses, including the house of the Al-Muzannar family where two civilians, a young man and a 75year-old woman, also died.  They were: Ameena Matar al-Mauzannar, 75; and
Abdullah Mohammed al-Muzannar, 19.
One banner that hangs on a damaged wall reads, “Why were they killed?” Another shows enlarged pictures of the Dalu children’s faces.
Atop the rubble of the building is the burned wreckage of the family minivan, flipped there upside down in the blast.
The Israeli military later claimed it had collapsed the building in hope of assassinating an unspecified visitor to the home, any massive civilian death toll justifiable by the merest hint of a military target.  Qassam rockets killing one Israeli a year are terrorism, but deliberate attacks to collapse buildings on whole families are not.
“All Palestinians are targeted now,” a woman who lives across the street told us. Every window in her home had been shattered by the blast.  She had been sure it was the end of her life when she heard the explosion. She had covered her face, and then, opening her eyes, seen the engine from the neighbor’s car flying past her through her home.  She pointed to a spot on the floor where a large rocket fragment had landed in her living room. Then, looking at the ruins of the Dalu building, she shook her head. “These massacres would not happen if the people who fund it were more aware.”
Mr. Dalu’s nephew Mahmoud is a pharmacist, 29 years of age, who is still alive because he had recently moved next door from his uncle’s now-vanished building to an apartment that he built for himself, his wife and their two year-old daughter who are also alive.  With his widowed mother and several neighborhood women, he and his wife had been preparing to celebrate his daughter’s birthday.  A garland of tinsel still festoons a partly destroyed wall. The blast destroyed much of his home’s infrastructure, but he was able to shepherd his family members and their guests out of the house to safety. Several were taken to the hospital in shock.
“I don’t know why this happened to us,” Mahmoud says.  “I am a pharmacist. In my uncle’s house lived a doctor and a computer engineer. We were just finishing lunch.  There were no terrorists here.  Only family members here.  Now I don’t know what to do, where to go. I feel despair.  We are living in misery.”
“Any war is inhuman, irreligious, and immoral,” my friend, Dr. T., had told me.
Dr. T. is afraid that Israel is preparing a worse war, one with ground troops deployed, for after its upcoming election.  “We are hopeful to live in peace.  We don’t want to make victims. We love Israelis as we love any human being.”
“But we are losing the right to life in terms of movement, trade, education, and water.  The Israelis are taking these rights; they are not looking out for the human rights of Palestinians.  They only focus on their sense of security.  They want Palestine to lose all rights.”
Election logic aside, Israel has already violated the ceasefire – at any time the missiles and rockets could start raining down once more. Year round, that is what it means to live in Gaza.
I decided not to bring up the Santa Claus question and instead thanked him for his honest reflections and bade him farewell.
Kathy Kelly (Kathy@vcnv.org) co-coordinates Voices for Creative Nonviolence (www.vcnv.org)
Photo credits:  Johnny Barber

Donate
By Rise Up TimesPublished On: December 2nd, 2012Comments Off on Kathy Kelly> Truth and Trauma in Gaza