Where’s our humanity for Gaza?

“The Gaza Strip is now in its 46th year of occupation, 22nd year of closure, and sixth year of intensified closure.” 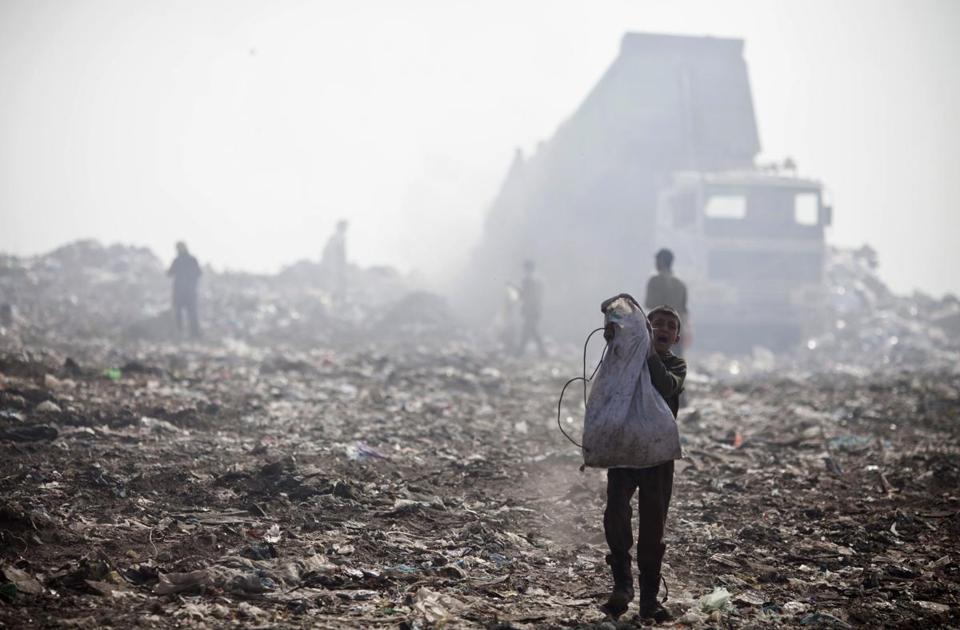 A young Palestinian boy carries a bag with scavenged plastic in a dump outside Gaza City earlier this month.
OLIVER WEIKEN/EPA

Between February 2009 — just after the Operation Cast Lead onslaught — and August 2012, Israeli attacks in Gaza, averaging six per week. They came by aircraft, helicopter gunships, drones, and tanks throughout Gaza; the confiscation of, or damage to, fishing boats and the detention and arrest of fishermen; attacks on industrial, farm, and food production facilities; and military ground incursions.
The current crisis is framed in terms devoid of any real context. The issue goes far beyond which side precipitated the terrible violence that has killed innocents on both sides. The issue — largely forgotten — is one of continued occupation and blockade, a grossly asymmetrical conflict that has deliberately and systematically disabled Gaza’s economy and people.
The Gaza Strip is now in its 46th year of occupation, 22nd year of closure, and sixth year of intensified closure. The resulting normalization of the occupation assumes a dangerous form in the Gaza Strip, whose status as an occupied territory has ceased to matter in the West; the attention has shifted — after Hamas’s 2006 electoral victory and 2007 takeover of the territory — to Gaza’s containment and punishment, rendering illegitimate any notion of human rights or freedom for Palestinians.
The Israeli government has referred to its siege policy as a form of “economic warfare.” In a Nov. 2008 cable from the US embassy in Tel Aviv released by WikiLeaks, US officials wrote, “As part of their overall embargo plan against Gaza, Israeli officials have confirmed . . . on multiple occasions that they intend to keep the Gazan economy on the brink of collapse without quite pushing it over the edge” with the aim of having Gaza’s economy “functioning at the lowest level possible consistent with avoiding a humanitarian crisis.” This was achieved through an Israeli-imposed blockade that ended all normal trade.
The result has been high and persistent unemployment, which stood near 30 percent by June 2012, according to the International Monetary Fund. Approximately 39 percent of Gaza’s people lived below the poverty line in 2011. The figure would be far greater without donor aid.

Gaza’s economic decline is seen in the near collapse of its agricultural sector. One factor is the destruction of around 7,800 acres of agricultural land during Cast Lead. Consequently, approximately one-third of Gaza’s total arable land is out of production. Furthermore, Israeli-imposed buffer zones — areas of restricted access — now absorb nearly 14 percent of Gaza’s total land and at least 48 percent of total arable land.
Similarly, the sea buffer zone covers 85 percent of the maritime area promised to Palestinians in the Oslo Accords, reducing 20 nautical miles to three, where waters are fouled by sewage flows in excess of 23 million gallons daily.
Another critical constraint is water. Gaza’s aquifer has been ruined by prolonged over-pumping and sewage and contaminant infiltration.
Almost all of Gaza’s municipal wells used for drinking water are seriously polluted. Due to the breakdown of Gaza’s sanitation infrastructure, particularly after 2008, this infiltration has led to elevated levels of nitrates and chlorides in the groundwater and soil — far above World Health Organization safety levels — posing a dangerous health risk to humans and livestock.
Israel’s blockade policy restricts the entry of materials needed to repair, maintain, and upgrade Gaza’s sewage and wastewater treatment infrastructure. Save the Children reported in 2011 that Israeli airstrikes destroyed water and sanitation infrastructure valued at $1.3 million.
The impact on health is clear: Just under 10 percent of Gazan children under five suffered from chronic malnutrition in 2010. According to Save the Children, “Diseases of poverty and conflict combined with a degenerating health care system are claiming growing numbers of Gaza’s children.”
Birth defects, congenital anomalies, and cancer cases are reportedly rising. This is likely due to environmental contamination, including the possible use of toxic weaponry during Cast Lead. The current military assault will undoubtedly worsen environmental conditions.
Yet the US government will probably cut funding to the Palestinians if they pursue United Nations observer membership.
Political differences aside, where is our humanity?
Sara Roy is senior research scholar at the Center for Middle Eastern Studies at Harvard University and author of “Hamas and Civil Society in Gaza: Engaging the Islamist Social Sector.

Donate
By Rise Up TimesPublished On: November 28th, 2012Comments Off on Sara Roy> Where’s our humanity for Gaza?