The US-Israeli Attack on Gaza

“The United States is not “supporting” an Israeli military endeavor, it is major actor in the attack on Gaza. The US is therefore a perpetrator of war crimes together with Israel.”

The Western media in chorus has described the Israeli attack on Gaza as an ad hoc IDF-led counterterrorism operation, launched on the grounds of “self defense” in response to Palestinian rocket attacks on Israel.

While reports acknowledge that president Obama, in the wake of the November 6 elections, had granted a “Green Light” to Tel Aviv, the central issue does not pertain to Washington’s support but rather to the direct involvement of the US government and military in the planning and implementation of the attack on Gaza.

There is evidence that Operation “Pillar of Cloud” was implemented in close liaison with Washington in the context of the broader process of allied military planning. Senior US military officials were on location in Israel working with their IDF counterparts in the days leading up to the attack.
Operation “Pillar of Cloud” was launched on the 14th of November, exactly one week after the US presidential elections. It was slated to be launched irrespective of  the outcome of the US elections. The first action was the targeted assassination of the leader of Hamas’ military wing Ahmed Jabari. The operation has since evolved towards a generalized bombing campaign and ground invasion involving the announced deployment of some 75,000 Israeli troops.
US- Israeli War Games
What is significant in assessing US involvement in Operation “Pillar of Cloud” is the fact that in the month prior to the attacks, the US and Israel were involved in the conduct of the largest joint war games in Israeli history. The objective of the war games was to test Israel’s missile air defense system against attacks from far and near, namely from Iran, Hezbollah and Hamas. 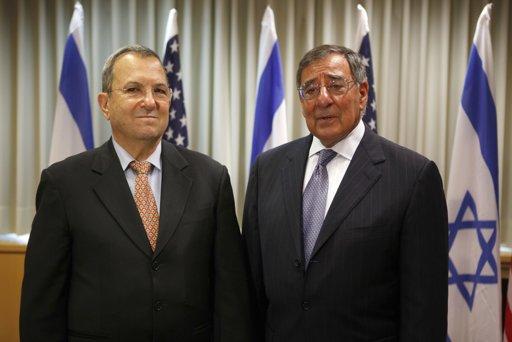 US Defense Secretary Leon  Panetta and Israel’s Minister of Defense Ehud Barack had established a process of close consultation. Panetta was in Israel in early August. He returned to Tel Aviv two months later on October 3, two weeks before the launching of the US-Israeli Austere Challenge 12 military exercises.
On October 18, the US and Israel launched within Israel the first phase of the joint war games. The military exercises were conducted over four weeks overlapping with the US elections (November 6) and culminating with the commencement of the Gaza bombings (November 14).
The joint US-Israeli war games, in a sense, “went live” on November 14 with the launching of Operation Pillar of Cloud.
It should be understood that the joint US-Israeli war games were intended to lead towards an actual military operation. Pillar of Cloud was planned well in advance. It had been “embedded” into the structure of the joint US-Israeli war games.
The joint war games dubbed “Austere Challenge 12” involved the active participation of some 3500 US and 1000 Israeli troops. The US contingent was made up 1000 US troops stationed in Israel including military advisers and special forces together with 2500 US personnel under the jurisdiction of the US 6th fleet in the Eastern Mediterranean and US European Command (EURCOM). UPI

Israeli soldiers stand near the Iron Dome, a new anti-rocket system, stationed near the southern city of Beersheba, Israel, March 27, 2011. The Israeli Defense Force deployed the $200 million Iron Dome system in response to dozens of rockets fired by Palestinian militants from Gaza in the past weeks. The Iron Dome is meant to protect Israeli towns from rockets fired from Gaza. UPI October 23, 2012)

The joint US-Israeli war games were jointly coordinated by U.S. Air Force Lieutenant General Craig Franklin and IDF Brigadier-General Shachar Shohat. The stated objective of these military maneuvers  was to “create “stress situations” in Israel’s airspace and off its Mediterranean coast that test the ability of both countries to act against attacks” from near [Hamas, Hezbollah] and far [Iran]“.

The conduct of these games was overseen by Admiral James G. Stavridis, commander of the United States European Command (EUCOM).  Reports point to the establishment of US command posts within Israel operating under the jurisdiction of  EUCOM.
Admiral Stavridis has acknowledged in this regard that:

“the two sides [US and Israeli command structures] had worked hard to create real intelligence during the exercise, The drill is meant to simulate an extensive war in the Middle East that would require the United States to intervene and provide Israel with further defense to intercept missiles.” (Haaretz, October 24, 2012)

The drills involved the deployment of  Batteries for the Patriot Pac-3 missile system, “stationed across Israel”. The US Aegis guided missile cruiser “was anchored off the coast of Israel as part of the drill”.

The missile interception drill is considered an integral part of the general exercise. The Israeli and American forces will practice identifying targets heading toward Israel, in order to decide which means should be used to intercept them and to activate the defense system as quickly as possible, before they can land on Israeli territory.

Israel’s Defense Minister Ehud Barak underscored the fact that “the joint exercise reflected the profound cooperation with the Americans” as a means to confront the ongoing threat from Hamas. This statement was made on November 12, two days before the onslaught of the attack on Gaza:

“These are very important times for advancing our missile defense coordination in the face of future tests, and also for ongoing activity against Hamas and the terror organizations in Gaza, which is likely to worsen and expand,…  The Gaza Strip constitutes a significant challenge, at whose center lies firepower, including the threat of rockets that can reach the Dan region.”(Haaretz, November 12, 2012, emphasis added)

In the context of the war games, Hamas and Hezbollah are identified as “nearby enemies” and allies of Iran:

“After the firing exercise, the defense establishment will conduct another round of tests, simulating the possibility that more advanced defense systems, including the Arrow 3 and Magic Wand systems, which have not yet been used in combat, would take part in confronting rocket barrages.”(Ibid)

The Insidious Role of Qatar
October 18, the joint US-Israeli war games are launched
On October 23, the Emir of Qatar Sheikh Hamad bin Khalifa Al Thani visits the Gaza Strip for meetings with the Hamas government and promises of  financial aid.
October 24, Israel’s President Shimon Peres insinuates that Qatar, a staunch ally of the US, is not only providing military aid to Hamas but is encouraging Hamas to increase the rocket attacks on Israel:

No sooner had he [The Emir of Qatar] departed, than the Islamist group ruling Gaza let loose with salvoes of rockets against Israel. …
Peres commented Wednesday [October 24] said that it is intolerable for the rulers of Gaza to receive millions of dollars form the Emir of Qatar and shoot rockets. Nowhere in the world, whether London or New York, would it be acceptable for money awarded for building materials to be spent on rockets. Israel cannot put up with any more of this, said the president. “It is up to Gaza to choose between development and terror and murder.”

October 24, Israel launches a bombing raid on Gaza killing four civilians in retribution for rocket attacks out of Gaza, which resulted in the wounding of four foreign workers. The press reports acknowledge that the Israeli air raids coincided with the onslaught of the joint US-Israeli war games:

What the above suggests is that the October 24 air raids on Gaza were already ongoing in the course of the joint US-Israel war games. Everything indicates that the attack on Gaza officially launched on November 14 was a sequel to the joint US-Israeli war games which had in fact already “gone live” in late October.
Covert Op?
The visit of the Emir of Qatar to Gaza at the very outset of the US-Israel joint war games has all the appearances of a US-led covert operation. Qatar is a US sponsored puppet regime It has a close relationship to both the US and NATO in both intelligence and military affairs, while also channelling financial aid to Hamas.
According to one report:  “the Emir of Qatar provided intelligence to the Israelis which was used in the targeted bombings of key Hamas government buildings.” (Fars New, November 17, 2012)
Beyond the scope of this article are the broader implications of the war on Gaza in relation to ongoing US-NATO military and intelligence operations in the Middle East.
Complicity in War Crimes. The Issue of  “Command and Control”
US Command Posts have been established in Israel.
Military command and control directed against the people of Palestine are under the jurisdiction of the US European Command, which works in partnership with Israel’s IDF.
While US troops are not directly involved in the invasion of  Gaza, the US military is exercising military command functions in liaison with Israel.
With regard to the joint US-Israel war games which culminated with the attack on Gaza, Israel is visibly the junior partner.
The United States is not “supporting” an Israeli military endeavor, it is major actor in the attack on Gaza. The US is therefore a perpetrator of war crimes together with Israel.

Donate
By Rise Up TimesPublished On: November 23rd, 2012Comments Off on Michael Chossudovsky> The US-Israeli Attack on Gaza