The US was once part of the international consensus against extra-judicial assassinations. Now it is a leader in that tactic. 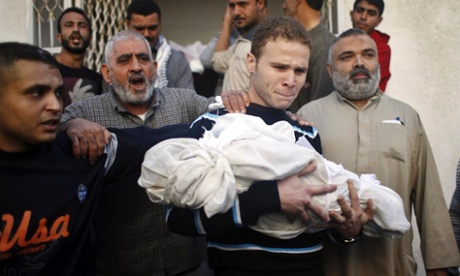 Jihad al-Masharawi, a Palestinian employee of BBC Arabic in Gaza, carries the body of his 11-month-old son Omar, who according to hospital officials was killed by an Israeli air strike in Gaza City 15 November, 2012. Photograph: Mohammed Salem/Reuters
(updated below)
Israel‘s escalating air attacks on Gaza follow the depressingly familiar pattern that shapes this conflict. Overwhelming Israeli force slaughters innocent Palestinians, including children, which is preceded (and followed) by far more limited rocket attacks into Israel which kill a much smaller number, rocket attacks which are triggered by various forms of Israeli provocations — all of which, most crucially, takes place in the context of Israel’s 45-year-old brutal occupation of the Palestinians (and, despite a “withdrawal” of troops, that includes Gaza, over which Israel continues to exercise extensive dominion). The debates over these episodes then follow an equally familiar pattern, strictly adhering to a decades-old script that, by design at this point, goes nowhere.
Meanwhile, most US media outlets are petrified of straying too far from pro-Israel orthodoxies. Time’s Middle East correspondent Rania Abouzeid noted this morning on Twitter the typical template: “Just read report in major US paper about Gaza/Israel that put Israeli dead in 1st sentence. Palestinian in 6th paragraph.” Or just consider the BBC’s headline. Worse, this morning’s New York Times editorial self-consciously drapes itself with pro-Israel caveats and completely ignores the extensive civilian deaths in Gaza before identifying this as one of the only flaws it could find with the lethal Israeli assault: “The action also threatens to divert attention from what Prime Minister Benjamin Netanyahu has repeatedly described as Israel’s biggest security threat: Iran’s nuclear program.”
In what I know will be a fruitless attempt to avoid having this discussion subsumed by that tired script: I will recommend several outstanding, truly must-read pieces written by others over the last 24 hours in lieu of my own reciting of the various arguments. Begin with this article by Yousef Munayyer in the Daily Beast setting the crucial context for the rocket attacks from Gaza; then read this Daily Beast news-breaking account from Gershon Baskin, who details how the provocations from the Israelis were geared toward disrupting an imminent peace deal with Hamas (“The assassination of Jaabari was a pre-emptive strike against the possibility of a long term ceasefire”); also vital is this time-line of events leading up to the rocket attacks from Gaza, with ample documentation from Ali Abunimah; and finally, there is this very succinct but poignant summaryof what Israel has done over the last three weeks.
I want to focus on the US response to all of this. US policy always lies at the heart of these episodes, because Israeli aggression is possible only due to the unstinting financial, military and diplomatic support of the US. Needless to say, the Obama administration wasted no time expressing its“full-throttled support” for the Israeli attacks. And one can’t help but notice the timing of this attack: launched just days after Obama’s re-election victory, demanding an answer to the question of whether Obama was told in advance of these attacks and gave his approval.
Ultimately, though, Obama had no choice but to support these attacks, which were designed, in part, to extra-judicially assassinate Hamas military leader Ahmed al-Jabari as he was driving in his car (the IDF thenproudly posted the video of its hit on YouTube). How could Obama possibly have done anything else?
Extra-judicial assassination – accompanied by the wanton killing of whatever civilians happen to be near the target, often including children – is a staple of the Obama presidency. That lawless tactic is one of the US president’s favorite instruments for projecting force and killing whomever he decides should have their lives ended: all in total secrecy and with no due process or oversight. There is now a virtually complete convergence between US and Israeli aggression, making US criticism of Israel impossible not only for all the usual domestic political reasons, but also out of pure self-interest: for Obama to condemn Israel’s rogue behavior would be to condemn himself.
It is vital to recognize that this is a new development. The position of the US government on extra-judicial assassinations long had been consistent with the consensus view of the international community: that it is a savage and lawless weapon to be condemned regardless of claims that it is directed at “terrorists”. From a 15 February 2001 Guardian article by Brian Whitaker on the targeted killing by Israel of one of Yasser Arafat’s bodyguards [emphasis added]:

“International opprobrium was directed at Israel yesterday for its state-approved assassinations of suspected terrorists – a practice widely regarded as illegal.
“A Foreign Office spokesman said the British government was shocked by what it described as the ‘murder’ of one of Yasser Arafat’s bodyguards by Israeli forces on Tuesday and of nine Israeli soldiers by a Palestinian yesterday. . . .
“Britain has also backed one of the strongest statements yet from the European Union. In a declaration issued by current president Sweden, the EU said it ‘deplores the practice of so-called ‘eliminations’ or extra-judicial killings of Palestinians carried out by Israeli security forces’.
“The EU, which is Israel’s biggest trading partner, reiterated ‘its strongly held opinion that Israel’s policy in this regard is unacceptable and contrary to the rule of law’.
“It continued: ‘The European Union urges Israel to cease this practice and thus respect international law.’
“The United States, while also condemning Palestinian violence, made clear its disapproval of the assassinations.
“State Department spokesman Richard Boucher said: ‘The use of Israeli helicopter gunships, Palestinian attacks against settlements and motorists, the use of mortars by Palestinians and the targeted killings by the Israeli Defence Force … are producing a new cycle of action or reaction which can become impossible to control.’
“Mr Boucher added that the new Secretary of State, Colin Powell, who is due to visit the Middle East next week, had spoken several times ‘about the need to avoid these kind of actions'”.

That US condemnation of Israel’s targeted killing came, by the way, from the George W. Bush administration. A month later, after another Israeli attack, Associated Press reported: “Secretary of State Colin Powell registered his opposition to ‘a policy of targeted killings’ in a 15-minute telephone conversation with Yasser Arafat, State Department spokesman Richard Boucher said” (illustrating the blatant fiction that Democrats are more peaceful than Republicans, then-Senator Joe Biden, in 2001, eventually attacked Bush officials for condemning Israeli assassinations).

Former UN Secretary-General Kofi Annan has repeatedly said that “extrajudicial killings are violations of international law.” EU foreign policy chief Javier Solana has said: “The European Union has consistently condemned extrajudicial killings. Israel has a right to protect its citizens from terrorist attacks, but actions of this type are not only unlawful, they are not conducive to lowering tension.” Former UK Foreign Secretary Jack Straw has similarly pointed out: “the British government has made it repeatedly clear that so-called ‘target assassinations’ of this kind are unlawful, unjustified and counter-productive.”
Thus, to condemn Israeli aggression here, President Obama would need do no more than simply affirm universally recognized precepts of international law, ones that the US government has long claimed to support (even as it often violated them). That, however, is no longer possible for Obama – at least not without triggering a global laughing fit. As the Council on Foreign Relations documented in April of this year:

“The United States adopted targeted killing as an essential tactic to pursue those responsible for the terrorist attacks of September 11, 2001. The Pentagon and the Central Intelligence Agency have employed the controversial practice with more frequency in recent years, both as part of combat operations in Afghanistan and Iraq, as well as in counterterrorism efforts in Pakistan, Yemen, and Somalia. Since assuming office in 2009, Barack Obama‘s administration has escalated targeted killings, primarily through an increase in unmanned drone strikes on al-Qaida and Taliban leadership, but also through an expansion of U.S. Special Operations kill/capture missions. . . .
“Despite the opposition, most experts expect the United States to expand targeted killings in the coming years as military technology improves and the public appetite for large-scale, conventional armed intervention erodes. . . .
“The Bush and Obama administrations have sought to justify targeted killings under both domestic and international law.”

In essence, what we find, yet again, is that the governments of the United States and Israel arrogate unto themselves the right to execute anyone they want, anywhere in the world, without any limitations, regardless of how many innocent civilians they kill in the process. “Rogue nation” is a term that is often casually tossed around in the discourse of foreign relations. Here, it is quite appropriate, and – when it comes to extra-judicial assassinations – clearly applies to the two countries who apply the term most frequently to others.
Obama – the killer of Anwar al-Awlaki, Awlaki’s 16-year-old American son Abdulrahman, and countless other innocent men, women, teenagers and children – could not possibly condemn Israeli actions in Gaza without indicting himself. Extra-judicial assassinations, once roundly condemned by US officials, are now a symbol of the Obama presidency, as the US and Israel converge more than ever before: if not in interests, than certainly in tactics.

On Wednesday, I was on Democracy Now discussing Obama’s second term and the role progressives are likely to play in it; the short video of that segment, along with a transcript, can be viewed here. Other segments I did on that program include a discussion of the Petraeus case (here) and the current state of Bradley Manning’s prosecution and related judicial issues (here). I also had an impromptu interview on Tuesday night on the streets of New York by We are Change’s Luke Rudkowski regarding Obama’s second term, progressives, and the role of journalism; that can be viewed here.

In case you were wondering what I meant when I referred to the fact that “media outlets are petrified of straying too far from pro-Israel orthodoxies,” consider – beyond the examples supplied above – the current top five headlines from the BBC on this story (via Nour Bakr): 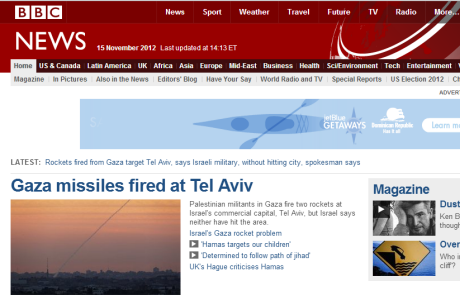 Donate
By sueannmPublished On: November 23rd, 2012Comments Off on Glenn Greenwald> Obama’s kill list policy compels US support for Israeli attacks on Gaza