The true reason US fears Iranian nukes: they can deter US attacks

GOP Senator Lindsey Graham echoes a long line of US policymakers: Iran must not be allowed to deter US aggression 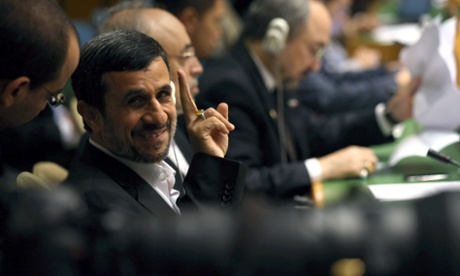 “Let’s even imagine that we have an atomic weapon, a nuclear weapon. What would we do with it? What intelligent person would fight 5,000 American bombs with one bomb?”

Cohen’s surprise notwithstanding, numerous Iranian leaders, including Ahmadinejad, have long made the same point. And it’s a point so obvious it should not even need to be made. No rational person takes seriously the claim that Iran, even if it did obtain a nuclear weapon, would commit instant and guaranteed national suicide by using it to attack a nation that has a huge nuclear stockpile, which happens to include both the US and Israel. One can locate nothing in the actions of Iran’s regime that even suggests irrationality on that level, let alone suicidal impulses.
That Iran will use its nuclear weapons against the US and Israel is rather obviously the centerpiece of the fear-mongering campaign against Tehran, to build popular support for threats to launch an aggressive attack in order to prevent them from acquiring that weapon. So what, then, is the real reason that so many people in both the US and Israeli governments are so desperate to stop Iranian proliferation?
Every now and then, they reveal the real reason: Iranian nuclear weapons would prevent the US from attacking Iran at will, and thatis what is intolerable. The latest person to unwittingly reveal the real reason for viewing an Iranian nuclear capacity as unacceptable was GOP Senator Lindsey Graham, one of the US’s most reliable and bloodthirsty warmongers.
On Monday, Graham spoke in North Augusta, South Carolina, and was asked about the way in which sanctions were harming ordinary Iranians. Ayman Hossam Fadel was present andrecorded the exchange. Answering that question, Graham praised President Obama for threatening Iran with war over nuclear weapons, decreed that “the Iranian people should be willing to suffer now for a better future,” and then – invoking the trite neocon script that is hauled out whenever new wars are being justified – analogized Iranian nukes to Hitler in the 1930s. But in the middle of his answer, he explained the real reason Iranian nuclear weapons should be feared:

Graham added that the second regime goal is “influence”, that “people listen to you” when you have a nuclear weapon. In other words, we cannot let Iran acquire nuclear weapons because if they get them, we can no longer attack them when we want to and can no longer bully them in their own region.

Graham’s answer is consistent with what various American policy elites have said over the years about America’s enemies generally and Iran specifically: the true threat of nuclear proliferation is that it can deter American aggression. Thomas Donnelly of the American Enterprise Institute and the New American Century Project haslong been crystal clear that this is the real reason for opposing Iranian nuclear capability [my emphasis]:

“When their missiles are tipped with warheads carrying nuclear, biological, or chemical weapons, even weak regional powers have a credible deterrent regardless of the balance of conventional forces … In the post cold war era, America and its allies, rather than the Soviet Union, have become the primary objects of deterrence and it is states like Iraq, Iran and North Korea who most wish to develop deterrent capabilities.”

“The surest deterrent to American action is a functioning nuclear arsenal …
“To be sure, the prospect of a nuclear Iran is a nightmare. But it is less a nightmare because of the high likelihood that Tehran would employ its weapons or pass them on to terrorist groups – although that is not beyond the realm of possibility – and more because of the constraining effect it threatens to impose upon US strategy for the greater Middle East. The danger is that Iran will ‘extend’ its deterrence, either directly or de facto, to a variety of states and other actors throughout the region. This would be an ironic echo of the extended deterrence thought to apply to US allies during the cold war.”

As Jonathan Schwarz has extensively documented, this is what US policy elites have said over and over. In 2001, Defense Secretary Donald Rumsfeld warned:

“Several of these [small enemy nations] are intensely hostile to the United States and are arming to deter us from bringing our conventional or nuclear power to bear in a regional crisis.”

In 2002, State Department official Philip Zelikow said that if Iraq were permitted to keep its WMDs, “they now can deter us from attacking them, because they really can retaliate against us.” In 2008, Democratic Senator Chuck Robb and GOP Senator Dan Coates wrote an incredibly hawkish Washington Post op-ed all but demanding an attack on Iran, and wrote:

“[A]n Islamic Republic of Iran with nuclear weapons capability would be strategically untenable. It would threaten U.S. national security … While a nuclear attack is the worst-case scenario, Iran would not need to employ a nuclear arsenal to threaten US interests. Simply obtaining the ability to quickly assemble a nuclear weapon would effectively give Iran a nuclear deterrent.”

The No 1 concern of American national security planners appears to be that countries may be able to prevent the US from attacking them at will, whether to change their regimes or achieve other objectives. In other words, Iranian nuclear weapons could be used to prevent wars – ones started by the US – and that, above all, is what we must fear.
(Graham’s questioner said that she believed Iran was not committed to developing a nuclear weapon, and Graham responded that Israeli leaders had reached the opposite conclusion. That is simply false.)
Whatever one thinks of Iran, the signal the US has sent to the world is unmistakable: any rational government should acquire nuclear weapons. The Iranians undoubtedly watched the US treatment of two dictators who gave up their quest for nuclear weapons – Iraq’s Saddam Hussein and Libya’s Muammar Gaddafi – and drew the only reasoned lesson: the only way a country can protect itself from US attack, other than full-scale obeisance, is to acquire nuclear weapons. That is precisely why the US and Israel are so eager to ensure they do not.

Donate
By Rise Up TimesPublished On: October 4th, 2012Comments Off on Glenn Greenwald> The true reason US fears Iranian nukes: they can deter US attacks