Human rights critics of Russia and Ecuador parade their own hypocrisy

The media’s new converts to civic freedom over the Pussy Riot and Assange asylum affairs show a jingoism blind to US abuses. 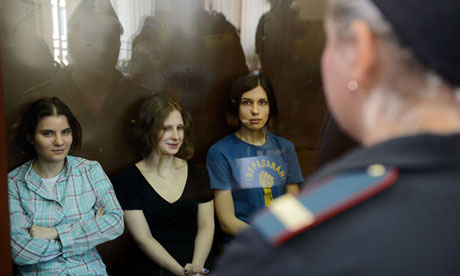 The punk band Pussy Riot have been sentenced to two years in jail for hooliganism after performing a protest song in Moscow’s Christ the Saviour Cathedral.
Photograph: Natalia Kolesnikova/AFP/Getty Images
Readers of the American and British press over the past month have been inundated with righteous condemnations of Ecuador‘s poor record on press freedoms. Is this because western media outlets have suddenly developed a new-found devotion to defending civil liberties in Latin America? Please. To pose the question is to mock it.
It’s because feigning concern for these oppressive measures is a convenient instrument for demeaning and punishing Ecuador for the supreme crime of defying the US and its western allies. The government of President Rafael Correa granted asylum to western establishmentarians’ most despised figure, Julian Assange, and Correa’s government then loudly condemned Britain’s implied threats to invade its embassy. Ecuador must therefore be publicly flogged for its impertinence, and its press freedom record is a readily available whip. As a fun bonus, denunciations of Correa’s media oppression is a cheap and easy way to deride Assange’s supposed hypocrisy.
(Apparently, activists should only seek asylum from countries with pristine human rights records, whichever countries those might be: a newly concocted standard that was conspicuously missing during the saga of blind Chinese human rights activist Chen Guangcheng at the US embassy; I don’t recall any western media outlets accusing Guangcheng of hypocrisy for seeking refuge from a country that indefinitely imprisons people with no charges, attacked Iraq, assassinates its own citizens with no due process on the secret orders of the president, bombs funerals and rescuers in Pakistan, uses extreme force and mass arrests to try to obliterate the peaceful Occupy protest movement, wages an unprecedented war on whistleblowers, prosecutes its Muslim citizens for posting YouTube videos critical of US foreign policy, embraces and arms the world’s most oppressive regimes, and imprisoned Muslim journalists for years at Guantánamo and elsewhere with no charges of any kind.)

But this behavior illustrates how purported human rights concerns are cynically exploited as a weapon by western governments and, more inexcusably, by their nationalistic, self-righteous media enablers. Concern over a foreign regime’s human rights abuses are muted, often nonexistent, when those regimes dutifully adhere to US dictates, but are amplified to deafening levels when nations defy those dictates and, especially, when it’s time to wage war against them. This is why attacks on protesters by US-supported regimes in Bahrain and Saudi Arabia are typically described by western media outlets with the innocuous-sounding, both-sides-are-to-blame term “clashes with rebels”, while villain-of-the-moment regimes in Iran, Syria or Libya are said to be slaughtering their own citizens. It’s why arming Syrian rebels to enable them to defend against regime oppression is conventional wisdom, whereas arming Palestinian rebels to defend against Israeli violence is criminal.
The classic case of this dynamic is the outburst of indignation in 2003 over – all together now – Saddam’s “gassing of his own people”: something he had done 15 years earlier, in 1988, when the US was arming and funding him and had multiple interests in its relationship with Iraq, and thus evinced little care about any of that. It was only when it was time to demonize Saddam in order to justify the attack did western governments and their media outlets suddenly discover their retroactive rage over those crimes.
This exploitation of human rights concerns drives even the most seemingly straightforward cases, such as the universal condemnation among All Decent People of Russia‘s obviously repellent punishment of Pussy Riot, the anti-capitalist, hardcore-leftwing punk rock band. As the Russian journalist Vadim Nikitin demonstrates in a New York Times op-ed Tuesday, western denunciations of Russia’s disregard for free speech are shaped far more by opportunism than anything authentic [my emphasis]:

“Pussy Riot and its comrades at Voina come as a full package: you can’t have the fun, pro-democracy, anti-Putin feminism without the incendiary anarchism, extreme sexual provocations, deliberate obscenity and hard-left politics. Unless you are comfortable with all that (and I strongly suspect 99% of Pussy Riot’s fans in the mainstream media are not), then standing behind Pussy Riot only now, when it is obviously blameless and the government clearly guilty, is pure opportunism. And just like in the bad old days, such knee-jerk yet selective support for Russian dissidents – without fully engaging with their ideas – is not only hypocritical but also does a great disservice to their cause.
“A former Soviet dissident and current member of the anti-Putin opposition, Eduard Limonov, knows such cynicism too well. Thrown out of the Soviet Union and welcomed in New York as a cold war trophy, Limonov soon learned that it wasn’t the dissent part that theUnited States loved about Soviet dissidents, but their anti-communism. A bristly and provocative anti-Soviet leftist, he got to work doing what he did best – taking on the establishment – and quickly found himself in hot water again, this time with the Americans. Limonov concluded that ‘the FBI is just as zealous in putting down American radicals as the KGB is with its own radicals and dissidents.’“

Nikitin notes what most western media accounts have ignored about Pussy Riot: its lead singer’s “participation, naked and heavily pregnant, in a public orgy at a Moscow museum in 2008”, sponsored by a radical art group that “had previously set fire to a police car and drew obscene images on a St Petersburg drawbridge”. Those acts, he accurately observes, “would get you arrested just about anywhere, not just in authoritarian Russia”.
Does anyone think that an American media that stands by complacently while excessive force and mass arrests are unleashed on the far more peaceful Occupy movement, or which says nothing about the systematic prosecution of American Muslims for core free-speech activities, possesses some sort of genuine concern for free speech and free assembly rights in Russia? As Nikitin rhetorically asks:

“Twenty years after the end of the cold war, are dissident intellectuals once again in danger of becoming pawns in the west’s anti-Russian narrative?”

That’s how human rights advocacy is typically used by the west’s establishment media: as a thinly disguised instrument for advancing nationalistic goals and, more insidiously, for their individual and collective self-affirmation. There is a huge industry of American political and foreign policy commentators who love to prance around together flamboyantly condemning the rights abuses of other people’s governments, while spending very little time and energy condemning abuses by their own.
One of the most vivid examples of this warped dynamic is the extremely disparate reaction from the American commentariat when journalists are imprisoned by Bad Foreign Governments as opposed to their own. For seven years, the US imprisoned an al-Jazeera cameraman, Sami al-Haj, at Guantánamo with no charges and spent most of that time interrogating him not about al-Qaida, but about al-Jazeera. With very few exceptions, American media figures failed even to mention, let alone condemn, the due process-free imprisonment of this journalist by their own government. The same silence characterized their reaction to the imprisonment of other Muslim journalists over the last decade by the US government.
By very stark contrast, when Iran imprisoned the Iranian-American journalist Roxana Saberi on espionage charges before releasing her five months after her arrest, countless American journalists and self-styled human rights advocates in the media were so very proud of their bold denunciation of the distant Iranian regime, turning the Saberi case into a cause celebre. Exactly the same thing happened with the 2009 conviction and imprisonment by North Korea of American journalists Euna Lee and Laura Ling: American journalists so courageously condemned the tyranny of North Korea.
Fixating on the rights abuses of distant governments while largely ignoring those committed by one’s own does not only demonstrate the glaring insincerity of the purported beliefs. Far worse, it is an abdication of one’s primary duty as a journalist and as a citizen: to oppose, first and foremost, the bad acts of one’s own government. Noam Chomsky put this best when asked why he spends the bulk of his time on the crimes of his own government (and its client states) rather than on America’s enemies:

“My own concern is primarily the terror and violence carried out by my own state, for two reasons. For one thing, because it happens to be the larger component of international violence. But also for a much more important reason than that: namely, I can do something about it. So even if the US was responsible for 2% of the violence in the world instead of the majority of it, it would be that 2% I would be primarily responsible for. And that is a simple ethical judgment. That is, the ethical value of one’s actions depends on their anticipated and predictable consequences. It is very easy to denounce the atrocities of someone else. That has about as much ethical value as denouncing atrocities that took place in the 18th century.“

An eagerness to condemn abuses by foreign governments while largely ignoring one’s own is not merely cowardly, though it is that. And it’s not merely an abdication of the prime journalistic duty, though it is that, too. Worst of all, it’s the media behavior that most effectively bolsters state propaganda, as it signals to the citizenry: human rights violations and civil liberties assaults are something those Bad Foreign Governments over there do, but not your own.
I would take more seriously all of this very inspirational, newfound worry about Ecuadorian press freedoms and Russian free speech rights on the part of Western media figures if they evinced any similar interest in infringements and abuses by their own governments and their allies: ones much more difficult, though much more consequential, to oppose.

Donate
By sueannmPublished On: August 29th, 2012Comments Off on Glenn Greenwald> Human rights critics of Russia and Ecuador parade their own hypocrisy