IS OUR POLICE OFFICERS LEARNING?

Video documentation by local activists and independent media shows that police officers and county deputies from across Minnesota have been picking up young people near Peavey Plaza for a training program to recognize drug-impaired drivers. Multiple participants say officers gave them illicit drugs and provided other incentives to take the drugs. The Occupy movement, present at Peavey Plaza since April 7th, appears to be targeted as impaired people are dropped off at the Plaza, and others say they’ve been rewarded for offering to snitch on the movement.

Local independent media activists and members of Communities United Against Police Brutality began investigating police conduct around the Plaza after witnessing police dropping off impaired people at the plaza and hearing rumors that they were offering people drugs.  We videotaped police conduct and interviewed participants, learning some very disturbing information about the DRE program.

Officers stated on record the DRE program, run by the Minnesota State Patrol, has no Institutional Review Board or independent oversight. They agreed no ambulances or EMTs were on site at the Richfield MnDOT facility near the airport where most subjects were taken. Multiple times, participants left Peavey Plaza sober, returned intoxicated, and said they’d been given free drugs by law enforcement. We documented on more than one occasion, someone being told they were sober by one officer, and then picked up by a different officer, and returning intoxicated.

Given the dangers of impaired driving, there is value in training law enforcement officers to distinguish between the effects of various drugs and several common medical conditions. However, we have captured video footage of instances in which DRE trainees recruited subjects who are not already impaired, and those participants say they were given drugs by the officers.

Although program documents indicate that participants must sign a waiver, https://dps.mn.gov/divisions/msp/forms-reports/Documents/SFSTSponsorResponsib… there was no indication from any of the participants interviewed that a waiver was offered or obtained. Further, video footage seems to validate the recollections of participants that no medical personnel or ambulance were on site during the observation and testing in Richfield. A DRE officer told one of our investigators that no Institutional Review Board assessment of the program has been made, a requirement of all experiments involving human subjects. Since it’s unethical to encourage people to take drugs–whether by giving them drugs directly or enticing them with food, cigarettes, or other rewards (which participants say they were given)–it is unlikely such a program would pass IRB review as it endangers the test subjects.

According to the WCCO article from May 2011, officer trainees in the past have worked with various non-profit organizations to recruit drug users. It would appear now that they are no longer relying solely on this tactic, instead recruiting users directly and, participants say, providing them with drugs. After the sessions, these individuals are then dropped off in public areas without supportive care, creating a public safety hazard. In an example at Peavey Plaza caught on film, an individual who said he’s been smoking courtesy of the police for an hour, crossed a line of Minneapolis police barricades, climbed to the top of a large sign and sat 15 feet above the sidewalk swinging his arms and legs in front of a police camera.

Our investigation points to particular efforts to target and recruit youth. Further, law enforcement officers have been taped recruiting people from the Peavey Plaza area of Nicollet Mall and have dropped off a number of impaired individuals at Peavey Plaza. In some instances, Minneapolis police squad cars were present while DRE trainees recruited people at Peavey Plaza. After receiving drugs, some subjects were asked to snitch on the Occupy movement or asked about various people and activities of Occupy, they said. Given efforts by the Minneapolis city council to pass an ordinance designed to restrict access to Peavey Plaza by the Occupy movement, the conduct of DRE trainees points to the possibility that they are working hand-in-glove with Minneapolis police to discredit and disrupt the Occupy movement.

“I think most people would be very surprised to have our tax dollars used to get people high,” states Michelle Gross, president of Communities United Against Police Brutality. “These activities call into question the methods and motives of this DRE training.” 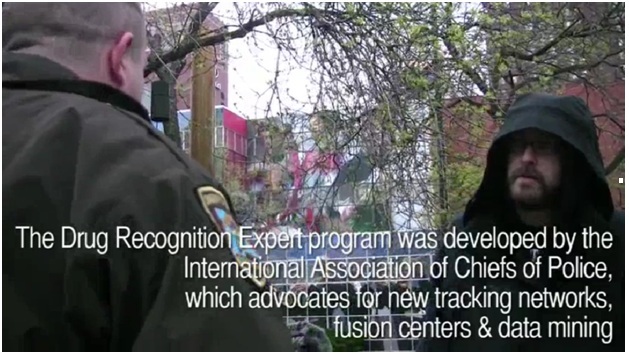 The International Drug Evaluation and Classification Program -DECP | 515 N. Washington Street, Alexandria, VA 22314 | Telephone 703.836.6767   info@decp.org. — has their own website.   A link to finding the state coordinators and other information is included.

Minnesota State Patrol had a. great idea, seeing as they are bored and hate everyone, particularly Occupy protesters? The Occupy protesters are just hanging around the central location of Peavey Plaza, causing problems, wasting cardboard, not getting jobs, so in lieu of beating them with a stick, the police department decided it would work better to “recruit” these useless individuals, feed them marijuana and possibly other drugs, then observe their behavior as part of a police “training” program that teaches state patrol officers what different kinds of intoxication look like. Others were apparently given weed if they would simply rat on fellow protesters. It was very exciting for some Occupiers, because their title was suddenly High Police Informant. “I smoked with a cop,” said a man who identified himself as Panda, and it was “some of the best shit I’ve had in a while.”

For most victims of this experiment it was described as just creepy and weird, and so these people were happy to be part of a documentary put together by Communities United Against Police Brutality and other groups.

One guy told the filmmakers that he was given a bowl of weed to smoke, and then was basically let loose in downtown Minneapolis, “visibly intoxicated.” According to CityPages, he then:

dangerously climbed to the top of a large sign near Peavey Plaza sitting 15 feet above the sidewalk, swinging his arms and legs. The man said that on another occasion, officers expressed disappointment that he was only high on weed. Officers told him they were “looking for something more harder (sic), someone to do meth or coke or something. I’ve never told a cop this before, but I said ‘fuck you, I don’t touch that,’” the man said.

This week, the Minneapolis City Council heard from several people involved. One witness came in the form of a mom, who said she was “very upset because her son had been given free drugs by a police officer when he went out to participate in what he thought would be social action in a public plaza to help improve his community and country,” in the words of Councilman Cam Gordon.

For the TC EVENTS CALENDAR and the ACTIONS AND ACTION ALERTS click on the tab at the top of the page and click on the item of interest to view.

According to a woman who participated in the research, this is a real, official, taxpayer-funded thing. The police are “trying to observe the characteristics of certain drugs so when [police] pull people over they know what they’re looking at,” she told the documentary filmmakers. It’s called the Drug Recognition Evaluator program, and it’s run by the Minnesota State Patrol.  [Wonkette inserted 35 minute video above here.]

For now, the Minnesota State Patrol says, via Lieutenant Eric Roeske, that, “We’re aware of the video and the allegations made by individuals in the video and we’re looking into it.” A police inspector at this week’s City Council meeting added that, “the program that I know is not how it’s described.”

Roeske also told the Minneapolis Star Tribune that the program usually tries to find people who are “already intoxicated,” and then, well, what, asks them what they’re on? And hopes they’re telling the truth? How do these reports go, then? Officer X observed that when intoxicated with just about anything, subject ran very far away from law enforcement personnel. X concluded that all drugs cause individuals to be fearful. X will now be on the lookout for anyone moving hurriedly away from law enforcement personnel, and will arrest them. [CityPages/Minneapolis Star Tribune]

Donate
By Rise Up TimesPublished On: May 6th, 2012Comments Off on Occupy Minnesota: Drugs & the DRE Program at Peavey Plaza