Marv Davidov, an iconic figure of the Minnesota peace movement who founded and led the Honeywell Project in a decades-long campaign to halt the production of anti-personnel weapons by Honeywell Inc., died Saturday afternoon in Minneapolis. He was 80, and had suffered from a number of health problems.

During one protest in 1983, nearly 600 protesters were arrested outside Honeywell’s Minneapolis headquarters in a civil disobedience action, the type of demonstration that Davidov and his allies had organized so many times that it was honed to a fine art.

A chain smoker until recent years, he was an immediately recognizable figure at protests, with his large moustache, blue skipper’s cap, almost always wearing a T-shirt with a protest slogan on it.

For years during the Vietnam War era, Davidov carried around a deactivated cluster bomb, the size of a softball, to show anyone who would listen that Honeywell was creating weapons being used by the U.S. military. He said the weapons indiscriminately killed innocent civilians in southeast Asia.

Davidov estimated that he was arrested 40 or 50 times, mainly in antiwar and civil rights demonstrations.

He was one of the original Freedom Riders, young people who rode on buses through the South in 1961 to desegregate bus transportation and bus terminals.

He and five other white youths from the Twin Cities were arrested at a black-only lunch counter in a Greyhound bus station in Jackson, Miss., when they refused to comply with police orders to move on.

In an interview at Walker Methodist Health Center on Thursday, although sedated with pain medication for a worsening circulatory problem, Davidov spoke with animation about being locked up for 40 days with other civil rights demonstrators at a Mississippi prison farm. He said the black and white protesters were incarcerated together.

“We were the first group of integrated prisoners in Mississippi state prison history,” Davidov said with a smile.

He described himself as a “nonviolent revolutionary” in an autobiography he wrote with Carol Masters.

One of Davidov’s admirers was Daniel Ellsberg, a White House consultant, who leaked the Pentagon Papers about U.S. military decision-making in Vietnam to the media. Ellsberg, who later became a peace activist, helped raise money for the Honeywell Project at Davidov’s invitation.

“Thanks to people like him, we’re still hanging on as a species,” Ellsberg said. “His nonviolence and his indefatigability and energy are an inspiration to many people.

“He’s lived a good life, and I told him so” when he spoke to Davidov by phone on Friday, Ellsberg said.

This week, as Davidov’s medical condition worsened, a number of peace activist friends stayed near him daily or sat in a waiting room outside his door.

“It’s one of those great things that happens,” Davidov said. “This kind of solidarity and love and support that people give one another.”

John LaForge, an antiwar activist friend, had brought a small refrigerator to his room with a bumper sticker on it that read, “No more war.”

Bill Tilton, a St. Paul attorney, said he first met Davidov in 1969 when they were staging a sit-in at the University of Minnesota in support of the African American Action Committee, which was demanding more scholarships for blacks.

“Marv is one of my heroes,” Tilton said. “He never took his eye off the ball of advocating for the rights of the underprivileged and accountability of government. He told me, ‘I am not going to have a regular job. I am always going to be part of the movement.’ He was always going to be an organizer and he succeeded.”

For years Davidov taught a class on “active nonviolence” at the University of St. Thomas. Jack Nelson Pallmeyer who taught the class with him, said “there was a warmth that came across when he related to students, a deeply respectful interaction in which Marv would share parts of his life story that awakened within students a possibility that they too could impact society.”

Barbara Mishler said she got to know Davidov when she took a class of his at St. Joan of Arc Catholic Church in south Minneapolis 30 years ago.

“When I first met him, I was so terrified of nuclear war,” she recalls. “He said, ‘Settle down and read and inform yourself, before you hit the streets.’ “

Lying in bed, barely able to sit up on Thursday, Davidov welcomed a reporter.

Nothing to say? Hardly

Asked if he had any thoughts that he’d like to pass on to young people, Davidov thought for a moment, smiled and said, “I’ve been waiting for this interview my entire life, and now I’ve got nothing to say.”

But as anyone who has ever known Davidov, or heard him address a rally, Davidov was never at a loss for words, including on Thursday.

On the current presidential election campaign: “It reminds me of one of the books that Paul Goodman wrote in the 1950s, ‘Growing Up Absurd.’ Once again the needs of the people who have most everything are satisfied first.”

On advice to people in this election year: “Find the people in your community who are probing reality and talking about how to fundamentally change it and work at a local level on these problems, creating peace, freedom and justice.”

On the Occupy protests against Wall Street that spread nationwide last year: “I thought it was great. The people were locating what their needs were and going out in the streets without compromise.”

On the kind of memorial gathering he’d like: “I want people to remember and tell funny stories about me and the struggle, and try to create a deeper, more profound movement and build the numbers.”

He is survived by his brother Jerry Davidov, a retired Minneapolis firefighter. 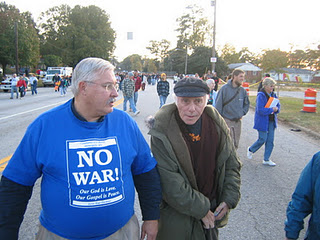 I moved to the Twin Cities after the Honeywell Project years so it took me a few years before my path crossed with Marv Davidov. It seemed to me that everyone involved in peace and justice protest in the area had worked with Marv at some time or other. He was a thorn in the side (or, more accurately, a pain in the ass) to those in authority who wished to protect a status quo which trampled the rights of the poor or marginalized or used military force against others.

As one friend remarked to me, he was also a pain in the ass to many of his friends as well.“A prophet without honor in his own home town” was an observation about another Jewish agitator a couple of millenniums ago; he ended up crucified by governmental authorities who wanted to repress his message which they thought was subversive to the empire. And what a subversive Marv was! Marv bristled at any sign of injustice and was quick to let you know his mind – but it was always tempered with his incredible sense of humor and his smile and laugh.

Marv gave me his blessing just before I went under the fence at the School of the Americas protest in 2005 and he told Christine I needed a proper reception when I was released from Federal Prison afterward so he, she, and some other faithful friends greeted me with a banner and noisemakers as I stepped off the Greyhound bus in my new prison-supplied clothes in 2006.

Carol Masters so wonderfully captured many of Marv’s adventures in the book she wrote with Marv (You Can’t Do That: Marv Davidov, Non-Violent Revolutionary, available at Amazon and it is great that this agitator for peace was able to be lionized before his passing. He loved being able to give readings from the book and then would embellish the story Carol had recorded with additional details and memories.

Thursday morning while visiting him at Walker Methodist Health Center, I told him I was stepping out of the room so one of his care-takers could change his dressing. He grabbed my hand, smiled, and said, “I love you, Steve” and I returned the sentiment. He knew his time was rapidly approaching and he dared not leave any loose ends. As I think of this brother with many fond memories, one of my favorites was his story about standing naked in the shower at a health club and his conversation with an FBI agent. If you don’t know it, get Carol’s book and enjoy some of the many adventures and stories of my friend and mentor.Rest in peace, my brother. [Marv died about noon today (Saturday, January 14, 2012)]

Donate
By Rise Up TimesPublished On: January 14th, 20123 Comments